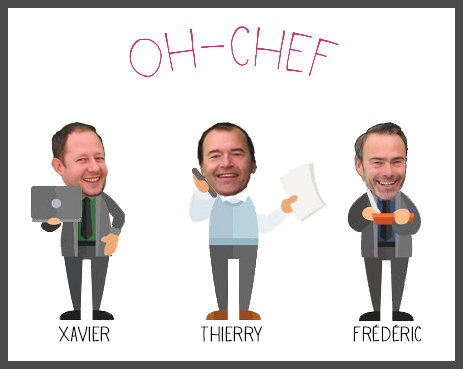 Discover the team of Oh-Chef !
Our team and our history

The great adventure of Oh-Chef began in 2013! And as it often happens in Belgium, it began around a good beer!

It is after a thrilling game of squash that two friends discussed of a project focused on their common passion for the cooking. Thierry and Xavier are what we could call "serial-entrepreneurs" and with them, the creation of a start-up just a step further...

So, here they go for the creation of an online platform that would have allowed the comparison and the reservation of cooking courses!

In order to test their idea, they joined the Brussels Startup Weekend. It was a success and at the end of this competition, it gave them the opportunity to join the Microsoft Innovation Center incubator. Thanks to warm support and the advices of professionals as well as the feedback from many people interested in their idea, the final concept was born: the organization of culinary experiences at home by professional cooking chefs.

On January 6th, 2014, "kabooom", Oh-Chef is online! However, the two foodies' entrepreneurs still missed a little something so that Oh-Chef can develop and be known... This little something was brought by Frédéric, also a true lover of cuisine, when he joined the adventure Oh-Chef a short time later.

Since then, it is with a robust appetite that these three friends are eager to satisfy and to surprise their faithful gourmets community, by proposing services that meet their need and more creative cooking chefs.